We only raise Beveren and Belgian Hares here at Trickster Hare farms, but we were very involved raising a few other breeds when we had a bigger farm, and I include info on all the breeds we raised.

We started with the Belgian Hare and the American. These two heritage breeds opened the door to discovering the endangered rabbit breed list at the Livestock Conservancy. It appears our preference is for the look and type of rabbit that were popular many years ago. We added a few other heritage breeds – the Harlequin, Beveren (heard so much about its personality!) and the Blanc de Hotot, which is the most exotic of meat-type rabbits.

The mandolin semi-arch typed rabbits were the ideal rabbit type more than 50 years ago. This build is curvy, sexy, elegant. Nowadays the commercial type is popular – what I call “rabbit loafs”, and the old breeds went out of style. Like all large scale farming, the focus is on which animal breeds can be concentrated in as small a cage as possible and still do well, so just a few are selected and become the dominant breed for food production. For the small scale farmer or backyard hobbiest, there are so many more interesting options.

For us, we want rabbits that produce well, have large litters, and grow fast. We first and foremost are putting food on our tables and feeding our cats a healthy raw food diet. We select for these traits. Show performance is a factor but if a rabbit is a slow grower or doesn’t produce large litters its not adding to the viability of the breed. This sets us apart from other show breeders whose main focus is winning on the table, at the sacrifice of viability in food production. Makes me sad there is such a strong division, as the show people are leading the way with breeds being preserved.

For fancy, which is purely fun, pets, and show, we raise the Belgian Hare. These rabbits are fairly useless as food but make lovely housepets, can be leash trained, and pretty much steal your heart and make you do anything and everything for them to be happy, all while hopping around your house getting into things. They are really interactive, many are very bright, and they rival cats and dogs with their personalities.

Below find a brief synopsis on each breed we raise or raised. 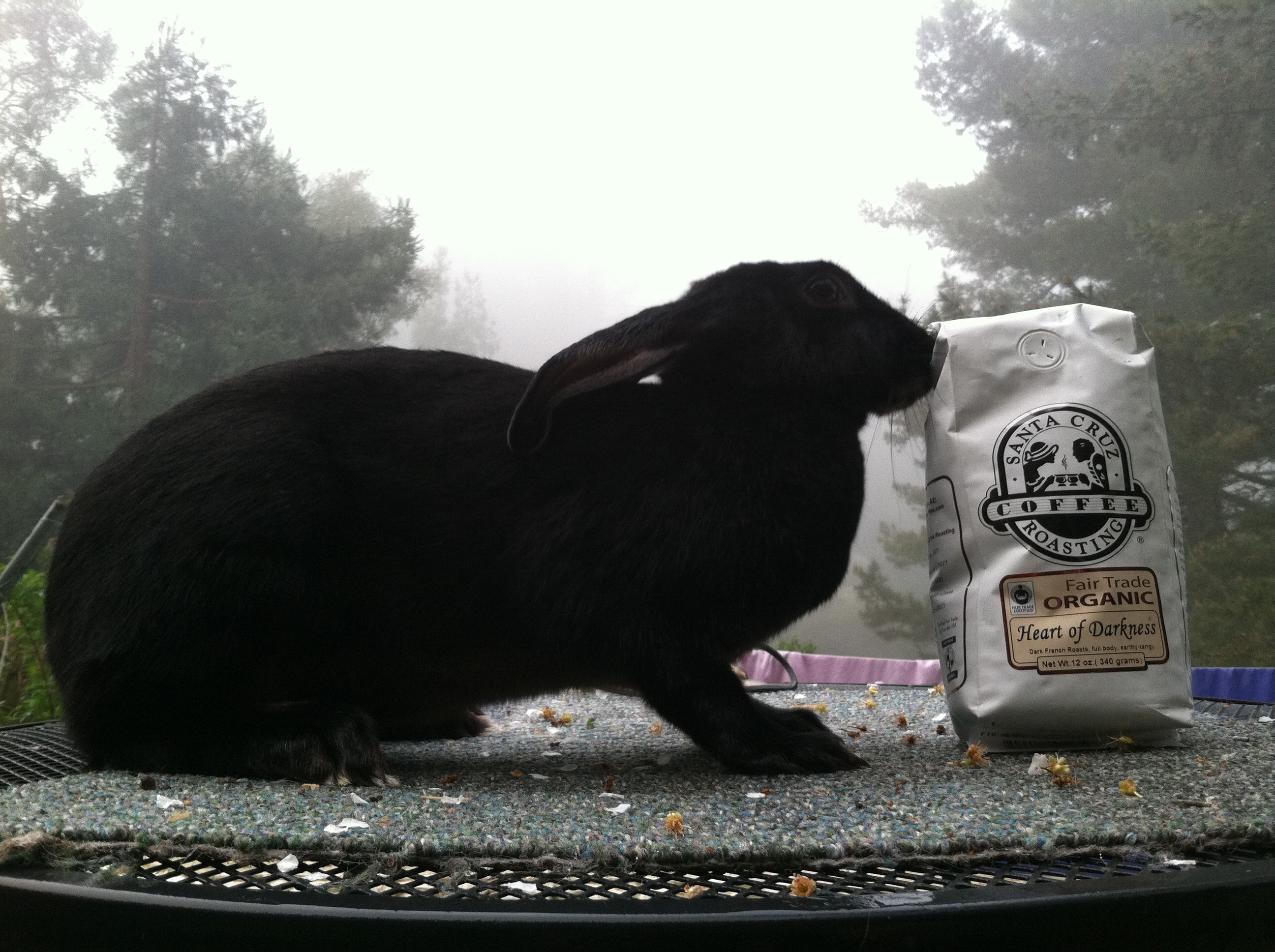 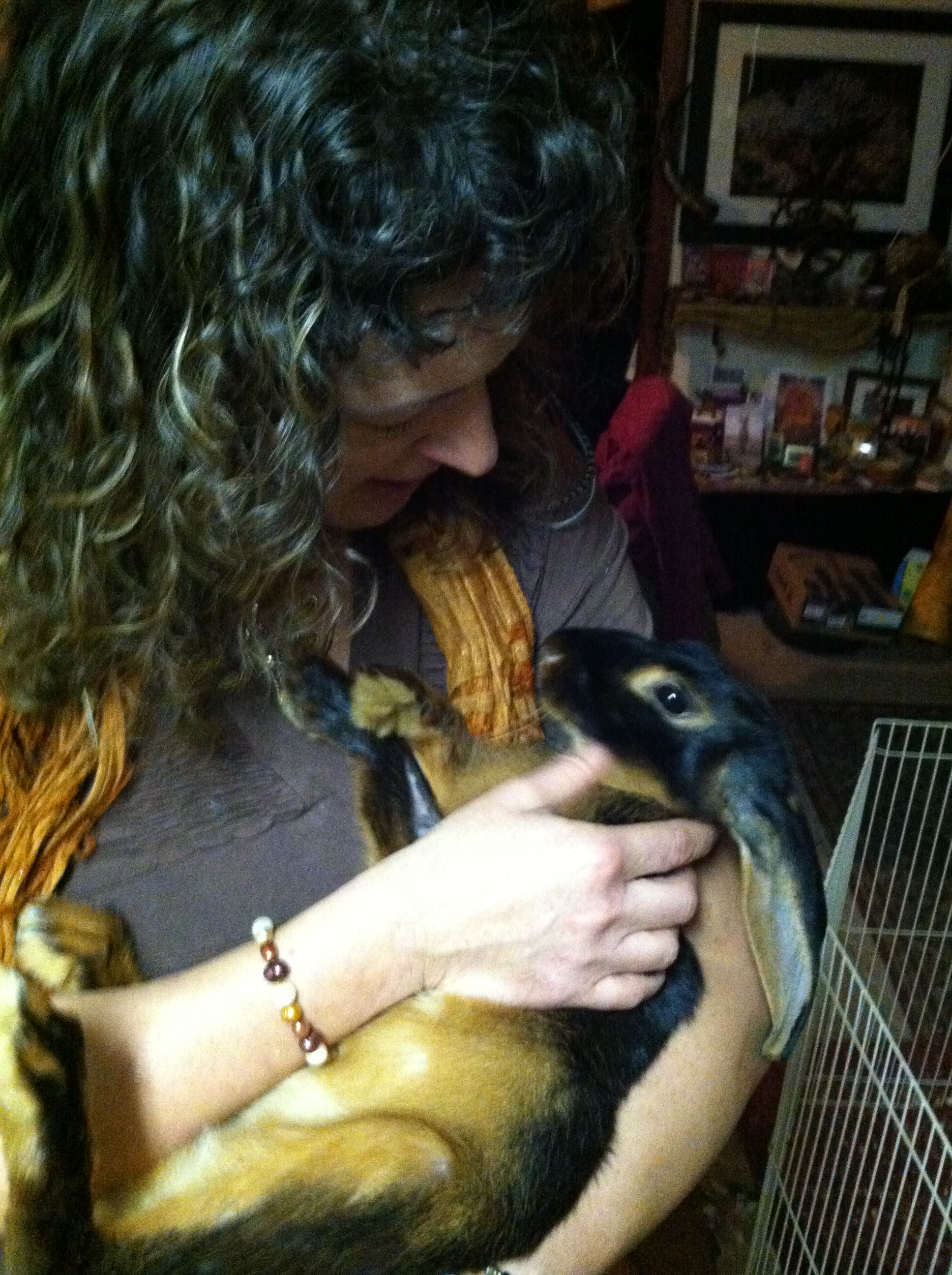 Yes hares can be cuddly – but it does depend on your lines!! Not all breeders breed for calmness and cuddliness. We select for interactive personalities.

An exquisitely fine and racy animal, Belgian Hares are very special and are not for everybody. They have particular needs different from other rabbits – such as, no wire floors, extra large pens and runs for plenty of exercise – or your whole house! This rabbit needs to be able to move for its health and strength for its extra long back.

For the fancier, they also require lots of patience – Hares breed when they want to, and not on schedule with anyone else. Many people report having just one litter a year, which is more than enough for this fancy animal, who is on the endangered list because there is not a high demand for this old fashioned breed.

They make ideal pets for people whom the wild look speaks to their heart and soul, they are usually very smart, easy to litter box train, leash train, affectionate and fairly calm, making them quite suitable for an indoor pet.

Belgian Hares were bred in Europe and England to look like the wild European hare. They were first imported to the U.S. in 1888 and fetched exorbitant prices – $500 to $1000 apiece in pre-1900 dollars! Those were called the Belgian Hare Boom Years. The Livestock Conservancy lists this rabbit as Threatened. For more info on the history this rabbit, visit the club page. 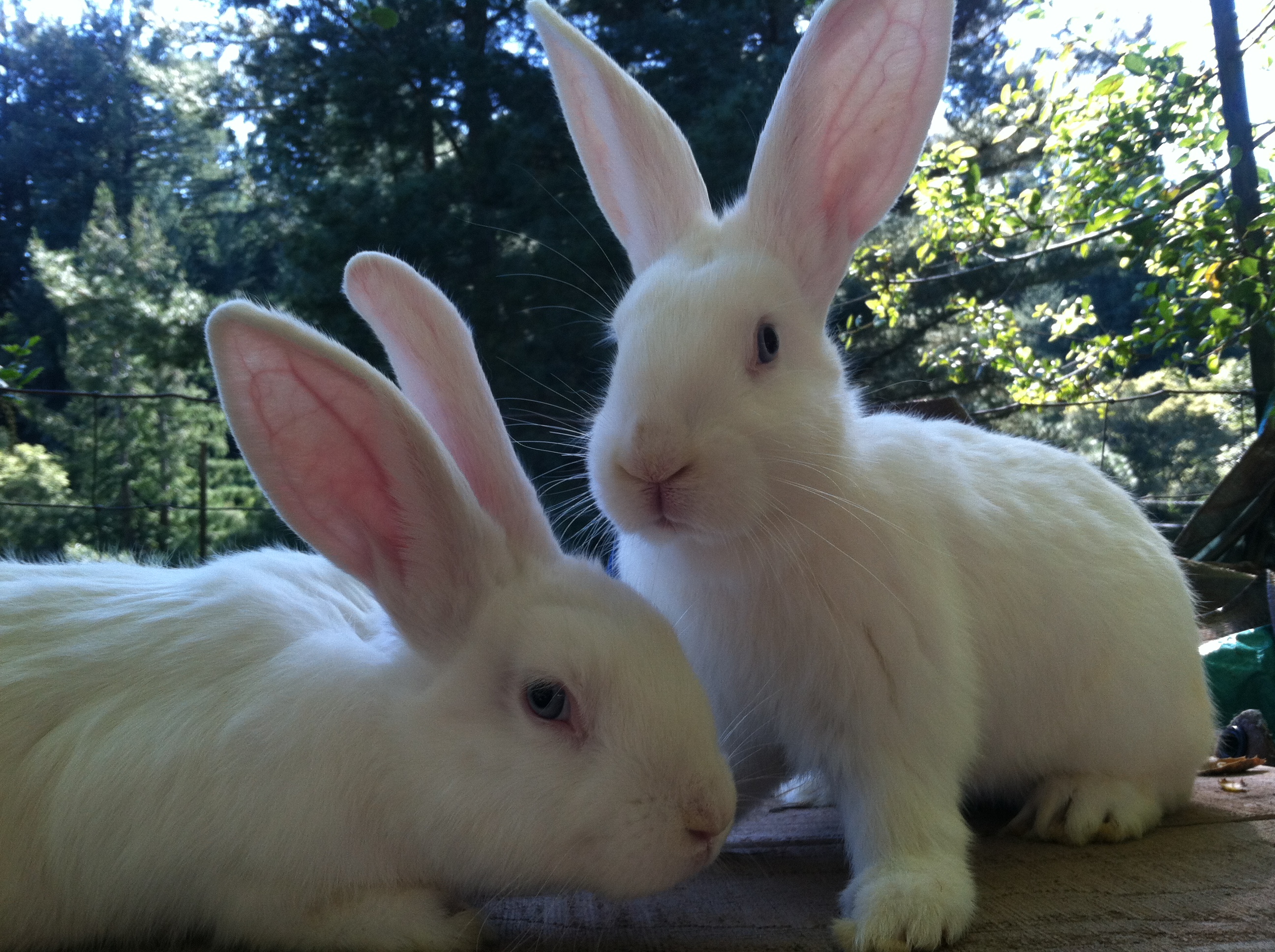 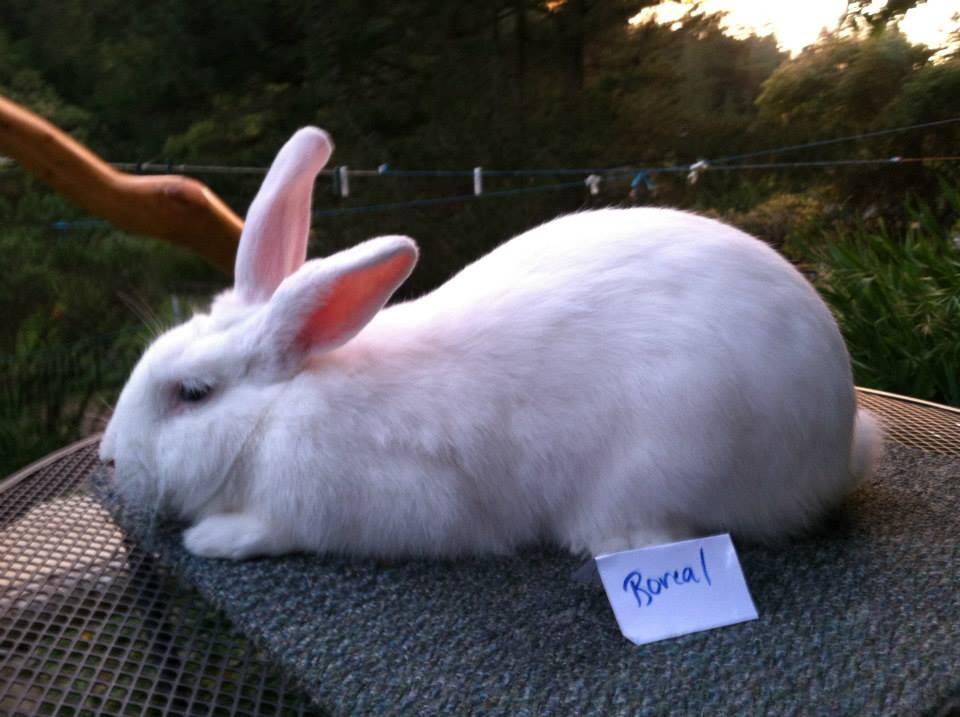 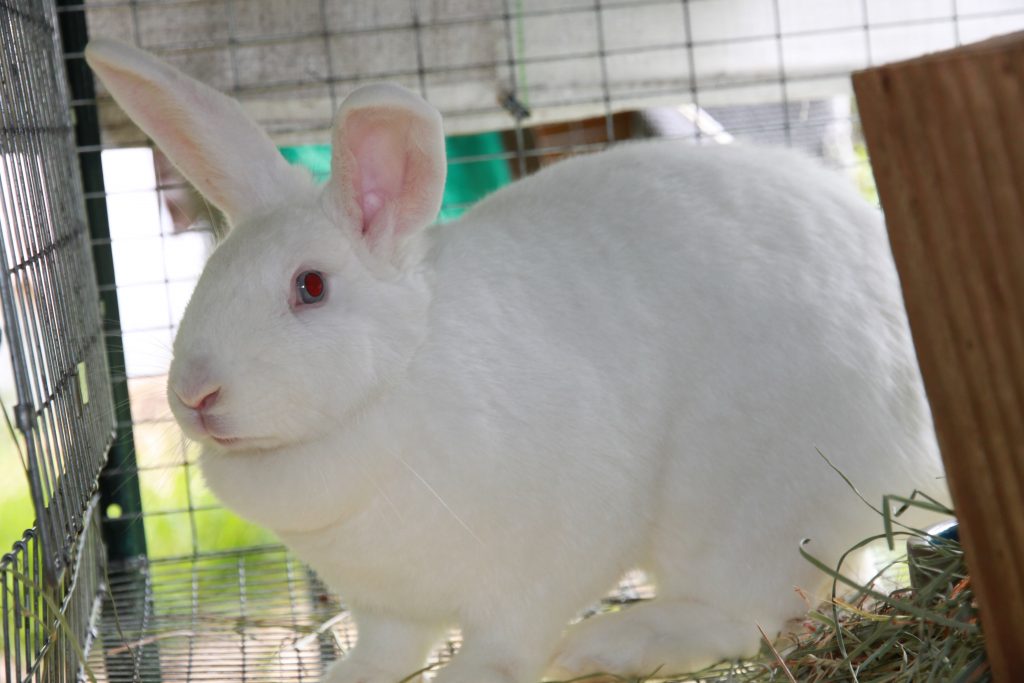 Its been theorized that Beverens fell out of favor as a meat breed due to their oversized personalities! These rabbits are the goofiest, quirkiest, gentlest, and can be one of the most affection-demanding rabbit breeds. Many people who find themselves breeding Beveren do not find it easy to eat them for this reason. At the same time, we do not promote bad traits here, from physical defects to personality issues, so those are the ones that go on the table. Beverens are the most popular rabbit here at Trickster Hares Farm because they are just so adorable we end up keeping many.

They do fairly with colony lifestyle if introduced early – if a doe is kept in colony she seems happy enough, its the separation and re-introduction that doesn’t always work as once they have a taste of their own territory. 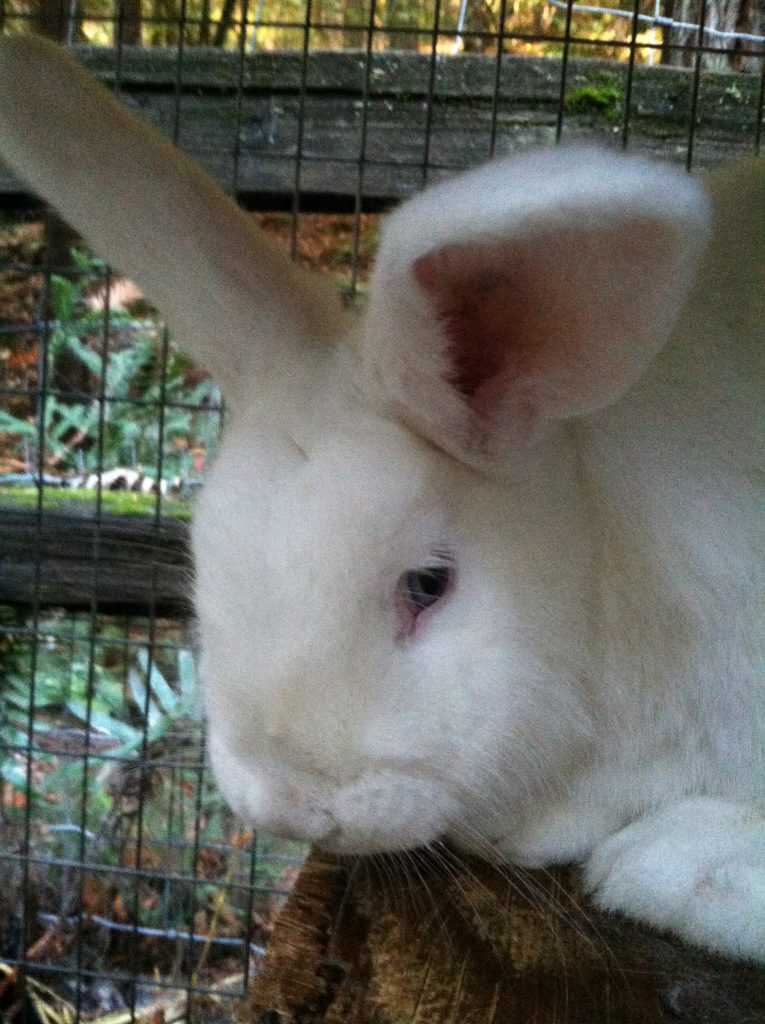 Our Beverens do excellent on the show table, winning Best of Breed in shows of over 40 animals, multiple times, and Best Opposite Sex of Breed at National Convention in Del Mar in 2016. A rabbit we sold a few months prior, won Beveren Nationals in 2017.

We’ve also won Best of Fur at many shows. We select here for fur, something overlooked by other breeders who focus mainly on type at the sacrifice of the quality of fur. The Beveren was the original fur breed, and unfortunately due to points on the show table – and the crashing of the fur industry – many breeders have let slip the emphasis on fur. Nowadays, there is a comeback in fur, and we hope sustainable fur sources like rabbits will be selected instead of foxes and mink, since rabbits are also a food source. We find the pelt on the Beveren is one of the best, with its rollback and density, and with selection, could be brought back to it’s former glory.

Its been very exciting to promote this exceptional breed. Beveren come in black, blue, and blue-eyed white. We raise white, although we have a few blue animals left, they are used for a white breeding program so we often get sports. This breed is very old, coming from Beveren, Belgium, but was first recognized in the U.S. in 1925. Its on the Watch list by the Livestock Conservancy. Many dedicated breeders are working with this breed but we still need more to keep the viability going. For more info, visit the club page. 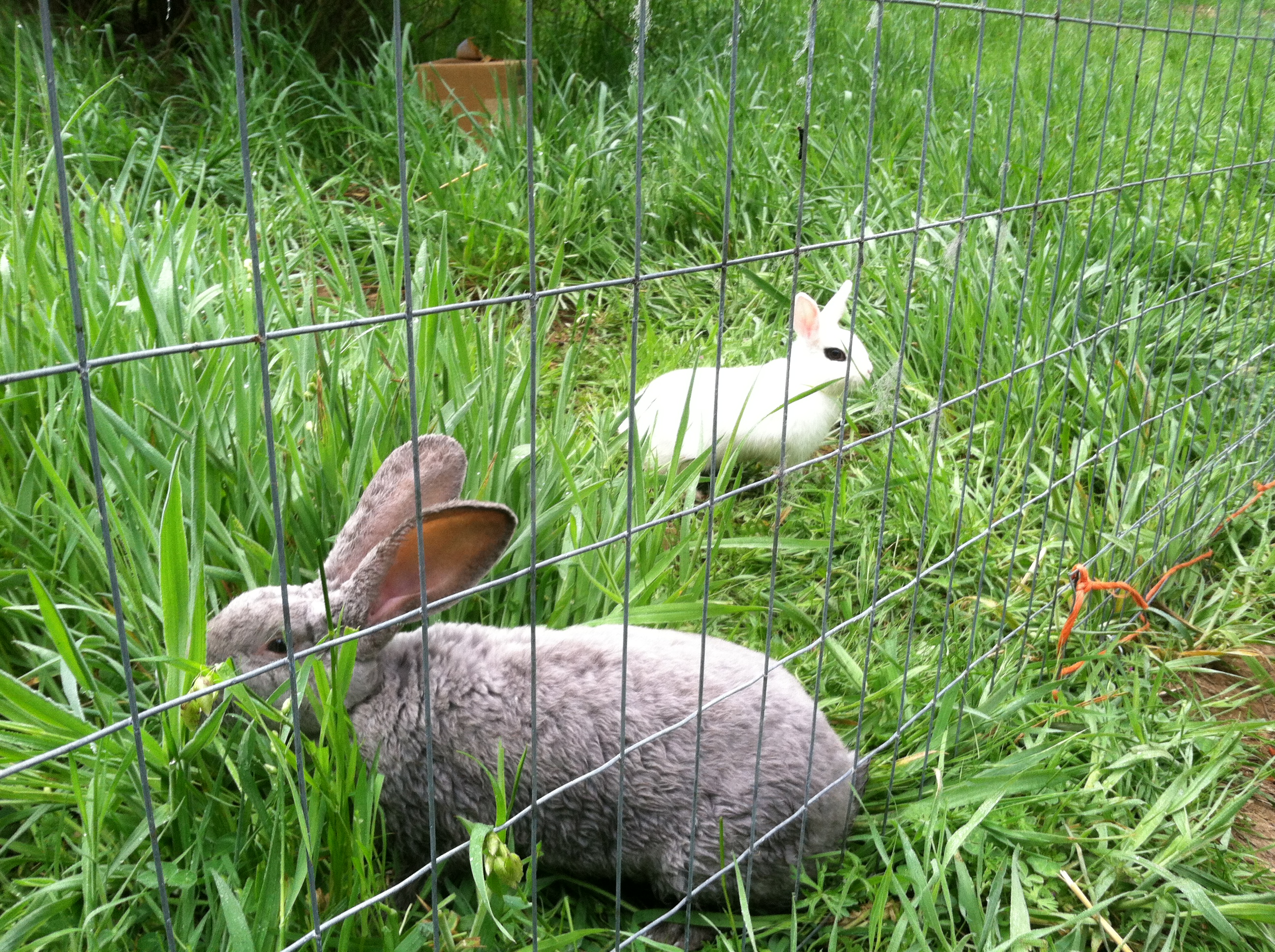 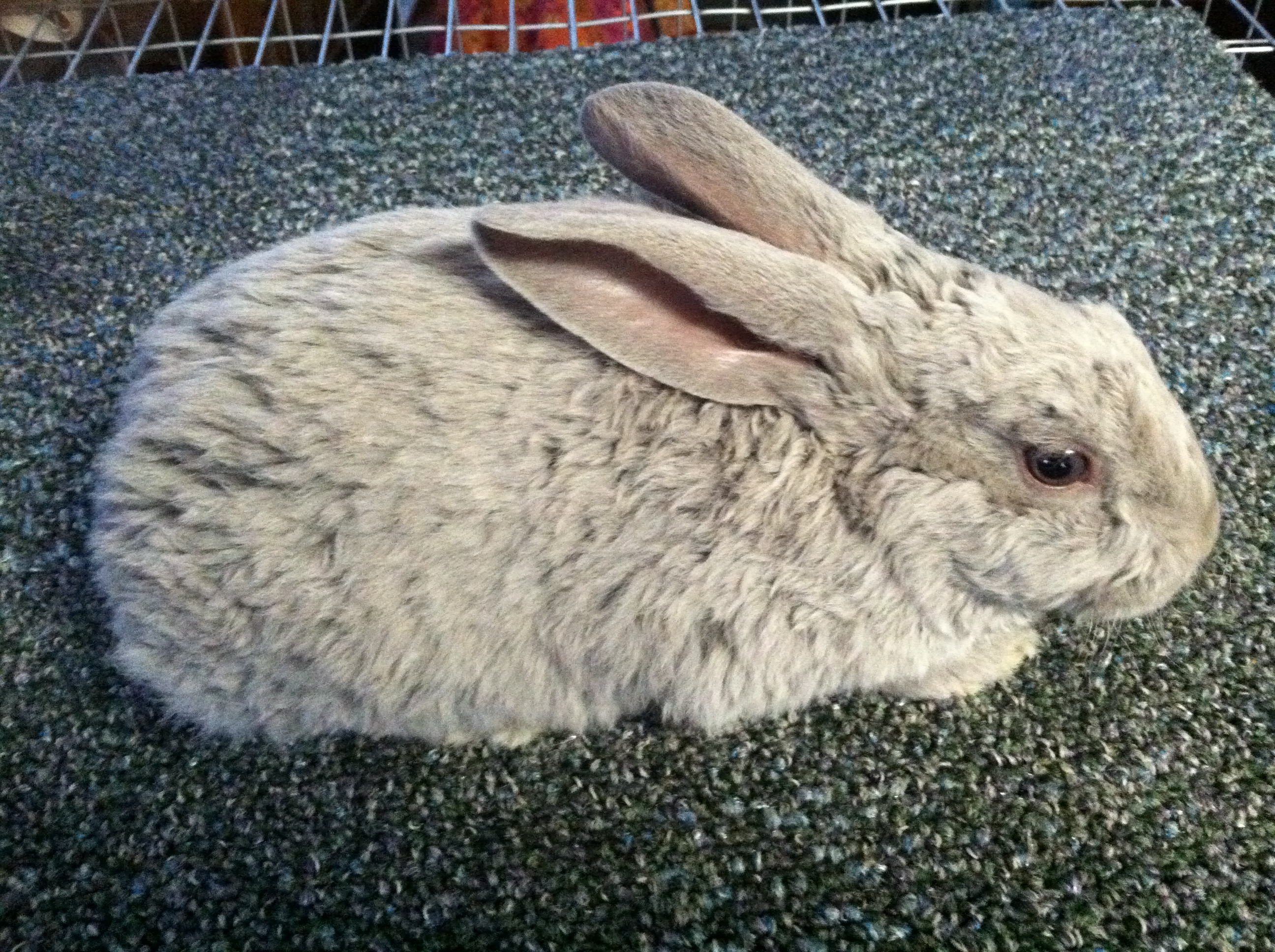 Rumple is the first curly Beveren we rescued from another breeder’s fryer pen.

These are purebred Beveren who show a recessive gene that is a throwback to the 1920’s when the Rex gene was introduced to Beveren as a coat option. We picked up Rumple from another breeder and are hoping to replicate her unusual wavy coat. Their fur is extremely soft like a Rex. We do not use them in our Beveren breeding program, but they make nice pets! 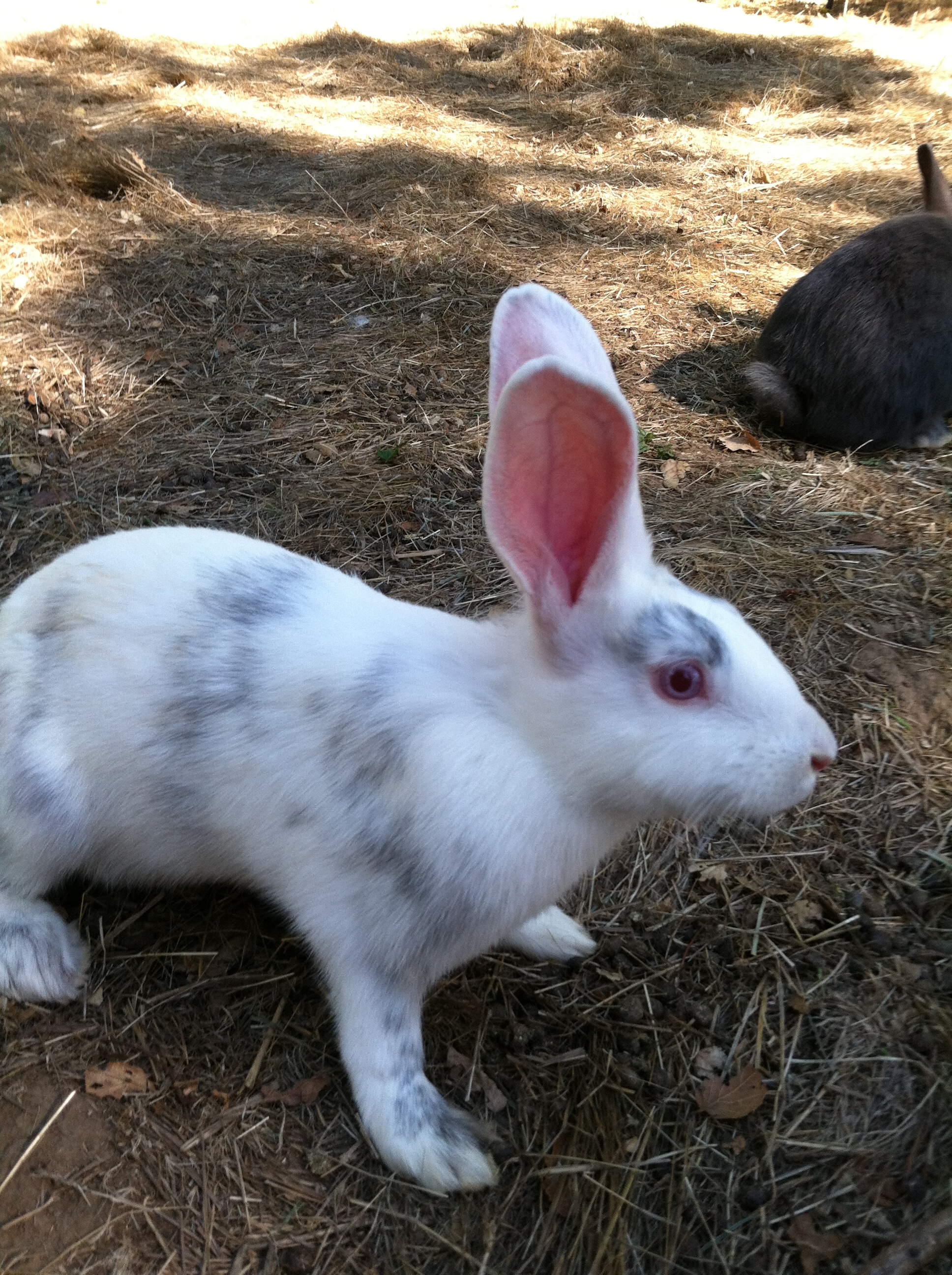 Sometimes we get weird ones. Sabina was a genetic mutant, a Chimera – when the zygotes of two individual rabbits fuse into one. She is a blue and a white rabbit fused, carrying two separate sets of DNA! This is how she can be red eyed with blue spots.

Unfortunately chimerism isn’t replicatable or we’d have a whole herd of her by now. She had a split personality to go with the two-sets of DNA. We loved her and mourn her untimely loss. One of the reasons we had to be happy to leave Coastal California behind was to get away from myxomatosis! 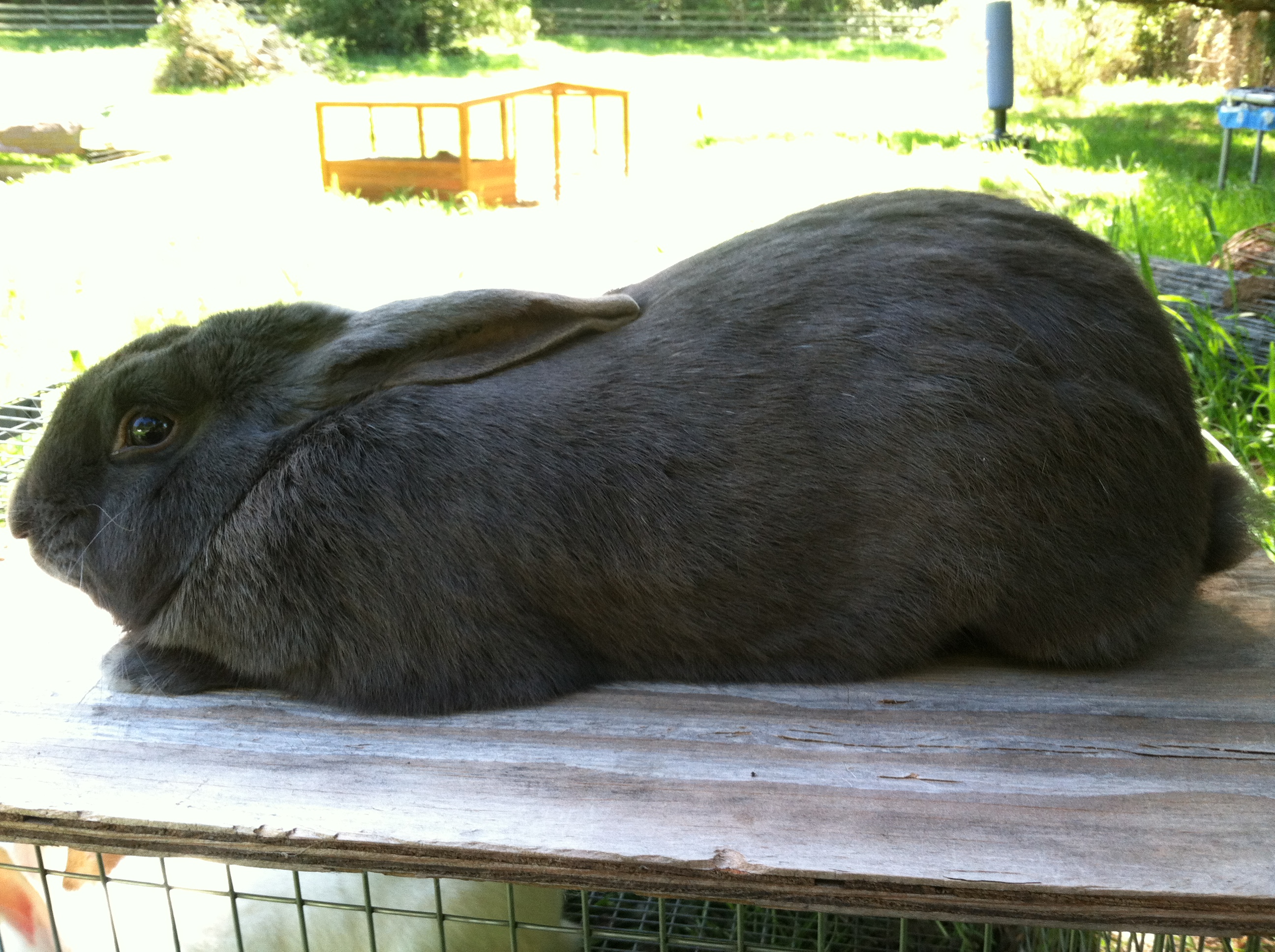 A mandolin shaped rabbit with a pleasant demeanor, and a rich deep blue coat, and also white. I personally find most Americans highly suitable for communal and colony living. They tend to be less territorial or aggressive and I see many does able to coexist in harmony together. They are a big rabbit. The American was originally called the German Blue and was renamed after WWI. It was introduced as a breed in 1917. Its listed as critical by the Livestock Conservancy. More info on its history visit the club page. 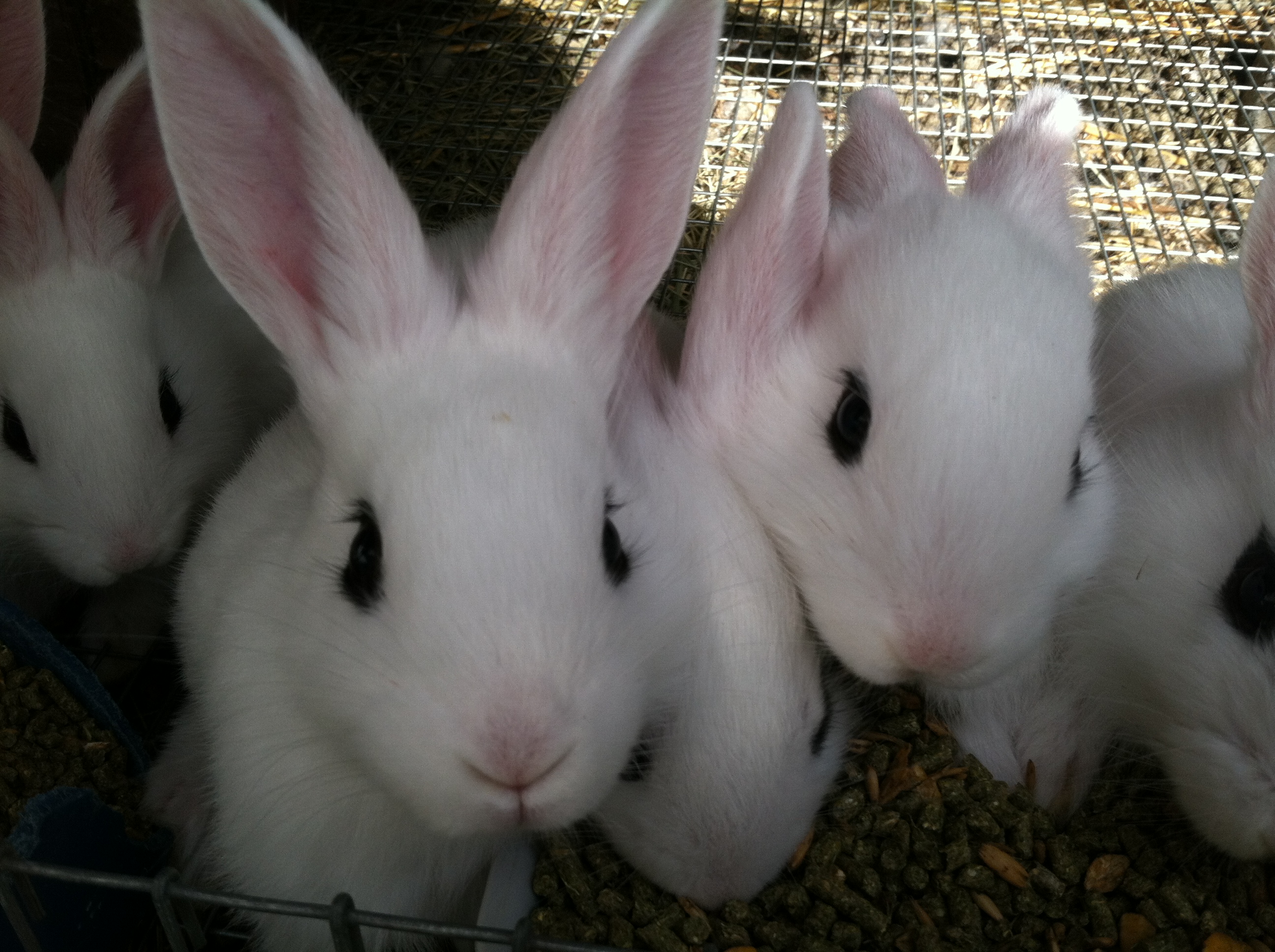 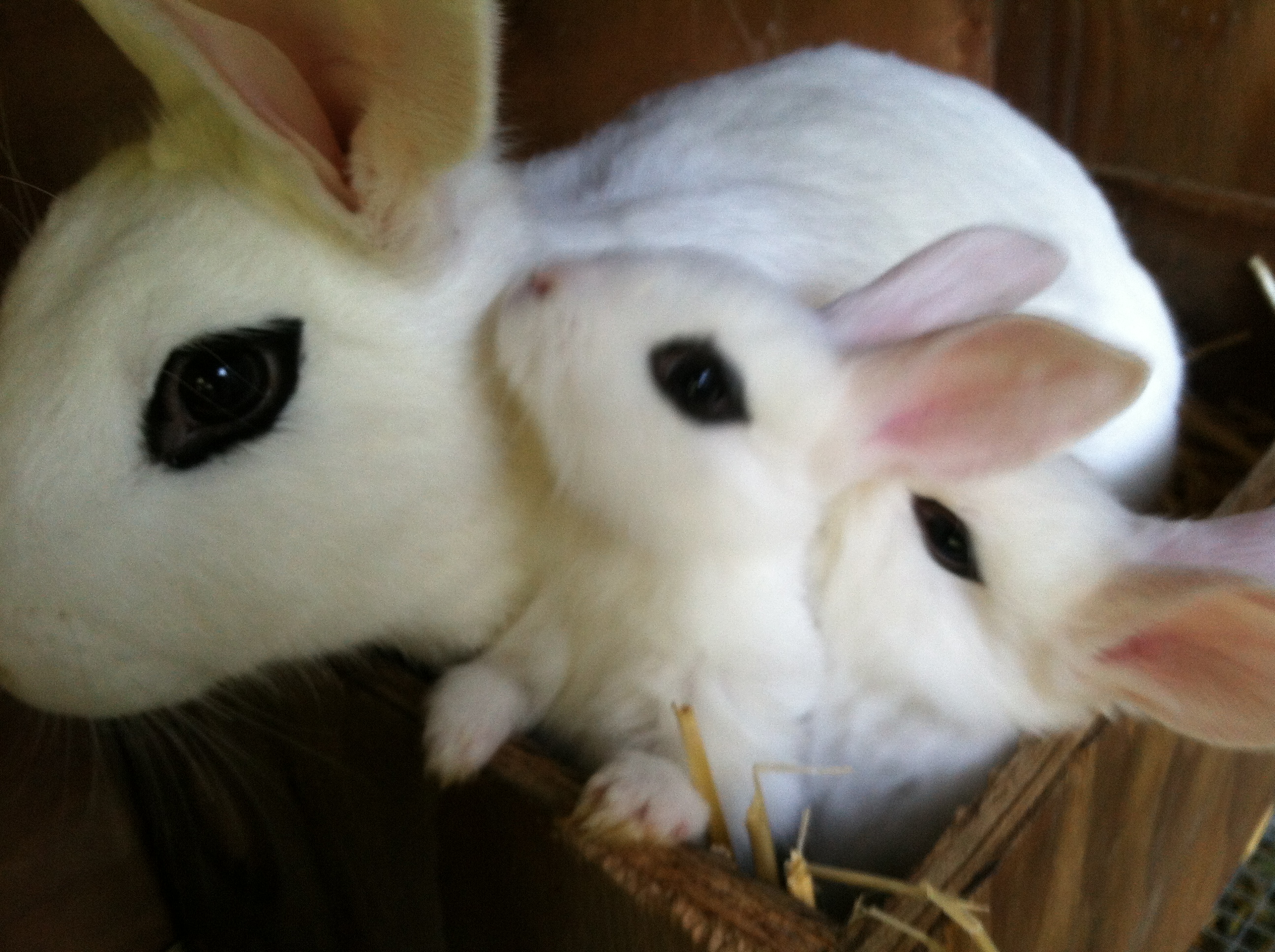 This doe is from a direct French Import. In France, the Hotot are more elegant, with an arched body, long legs and ears, and an alert stance.

Most exotic of the meat variety of rabbits is the Blanc de Hotot. Listed as Threatened  by the Livestock Conservancy, this breed by ARBA breeder tallies list it as the #1 most critically endangered in the U.S. Very few pure bloodlines exist in the country. The breed dates back to 1912 in France, while the original imports of this breed into the U.S. occurred in the 1970’s with the first showing in 1978. The original breed has very unique fur with a frosted sheen and the distinctive black markings around the eyes much like black eyeliner, making this rabbit very beautiful (and inspiring Arabic and Egyptian names!) Imports from Germany and France have occurred in recent years to regain the vigor and vitality of the breed and to reclaim the fur characteristics. Visit the club page for history and to locate current breeders. Ask around for those who raise purebreds and have the imported French lines for strongest viability. 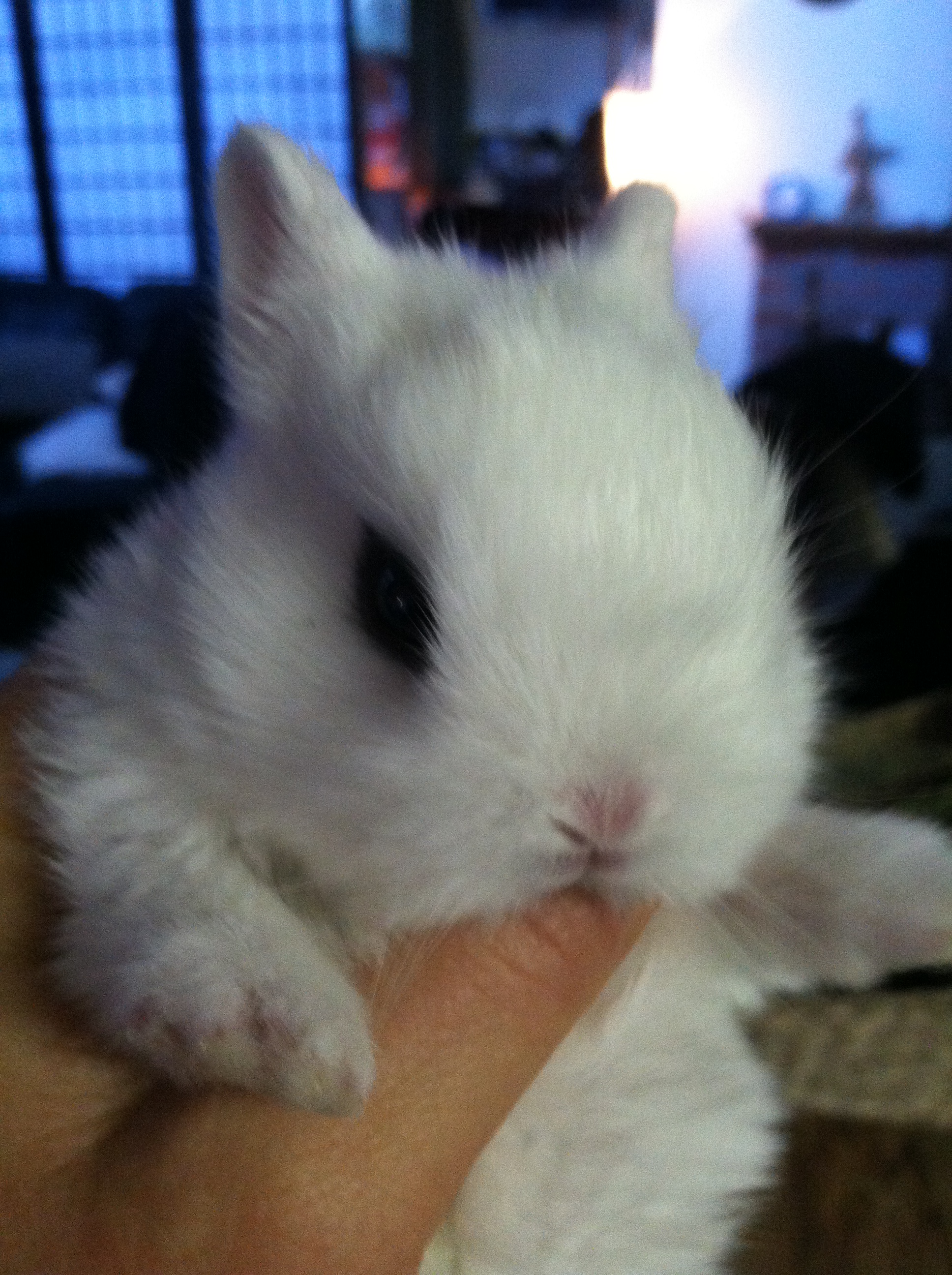 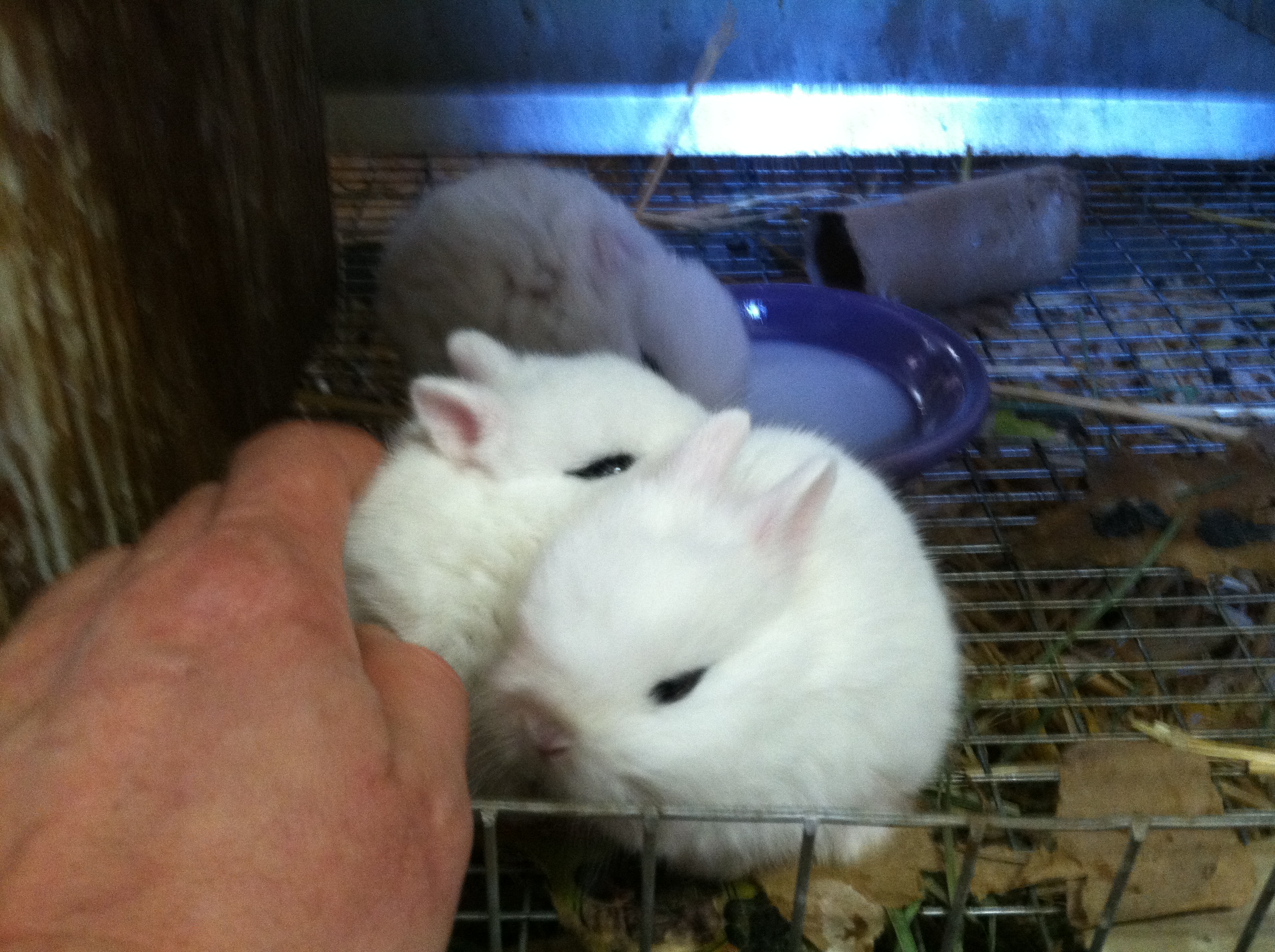 This breed is very rare in California. It is not listed as endangered or a heritage breed. This is a small breed, rabbits weighing 2-3 lbs. This is the dwarf version of the Blanc de Hotot.  These rabbits are mostly coveted for pets, and for show. The lines I had were very personable, having originated in a home who used them for petting zoo parties. They were friendly and appear to enjoy being pet. Being a small breed they tend to be a little more high energy but with all that bouncing around, settle in for a good long petting session just the same. 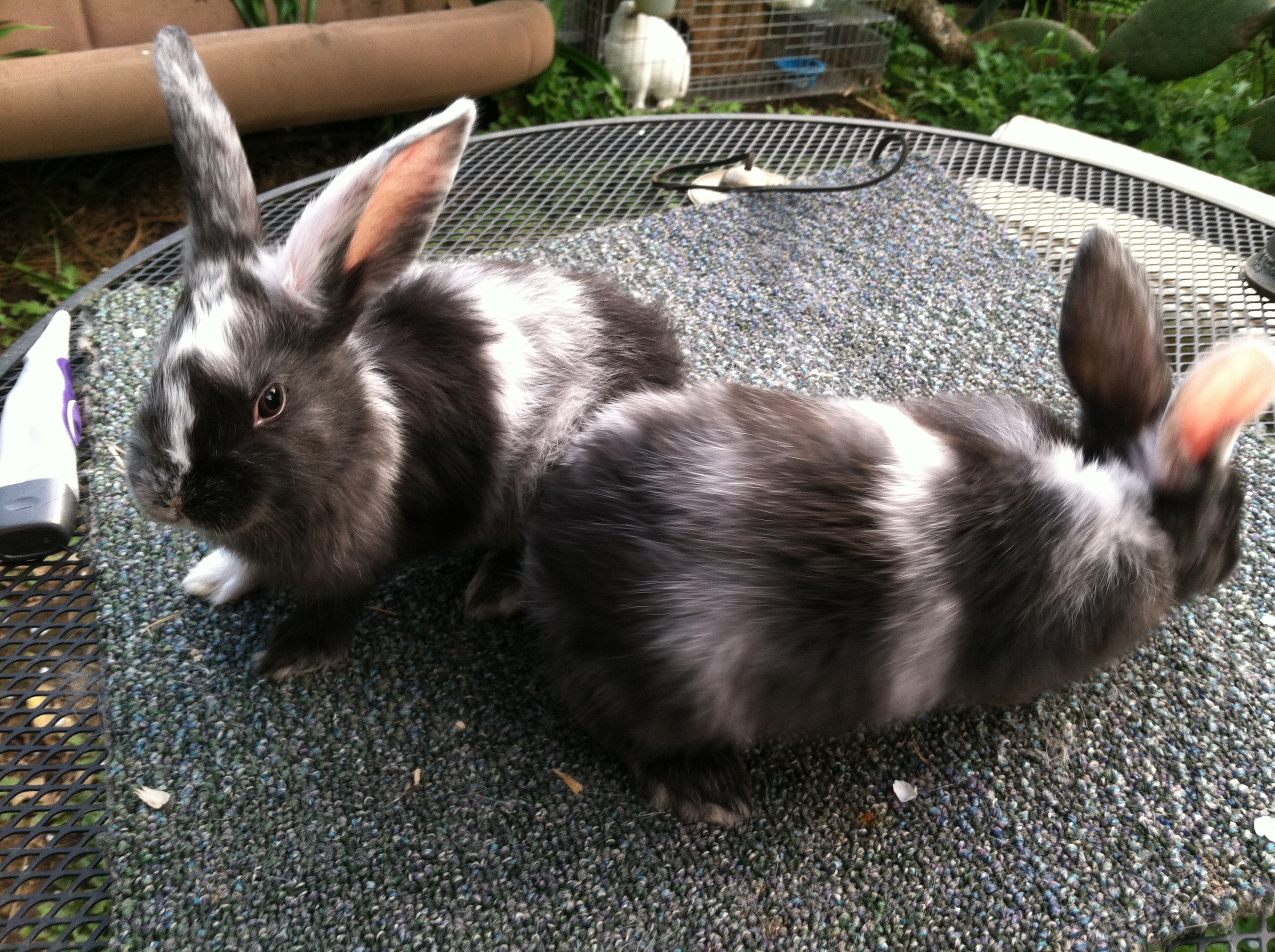 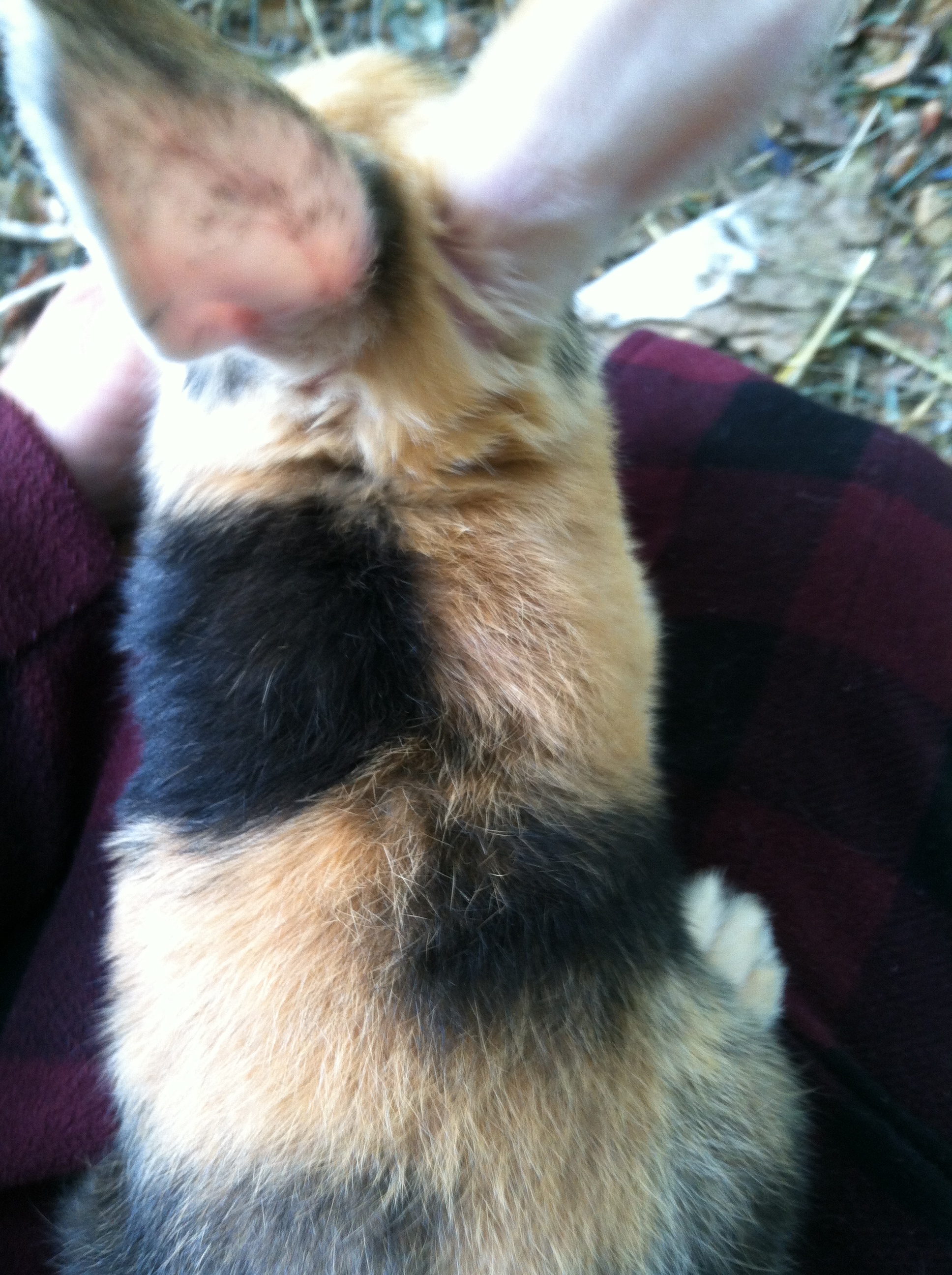 Some ideal markings on a Japanese.

A lively, bright little animal, with exceptional mothering skills, a very fine temperament make the Harlequin ideal for both a meat breed and as pets. This breed would be ideal in the new sport called “Hopping” or “Rabbit Agility” as the Harlequin is very smart, and exceptionally athletic, leaping with ease over any fences. In fact it appears any attempt at containing a Harlequin provides simply another interesting puzzle to solve for their inquisitive minds. When I experienced Harlequins in the house (to let the new youngster bond with me) I was subjected to her flying through the air and landing gracefully in my lap for a petting session. They very well might be acrobats and gymnasts, if Harlequin could be.

They have a solid build on a fine bone making them a wonderful source for food.  Another French breed, this one is quite old dating back to the 1800’s. Originally called the Japanese, this rabbit experienced a name change after WWII when “Japanese” became unpopular. We had all the colors here at Trickster Hares, and miss this breed very much. Harlequin is listed as Watch status by the Livestock Conservancy, and are quite rare on the West Coast. 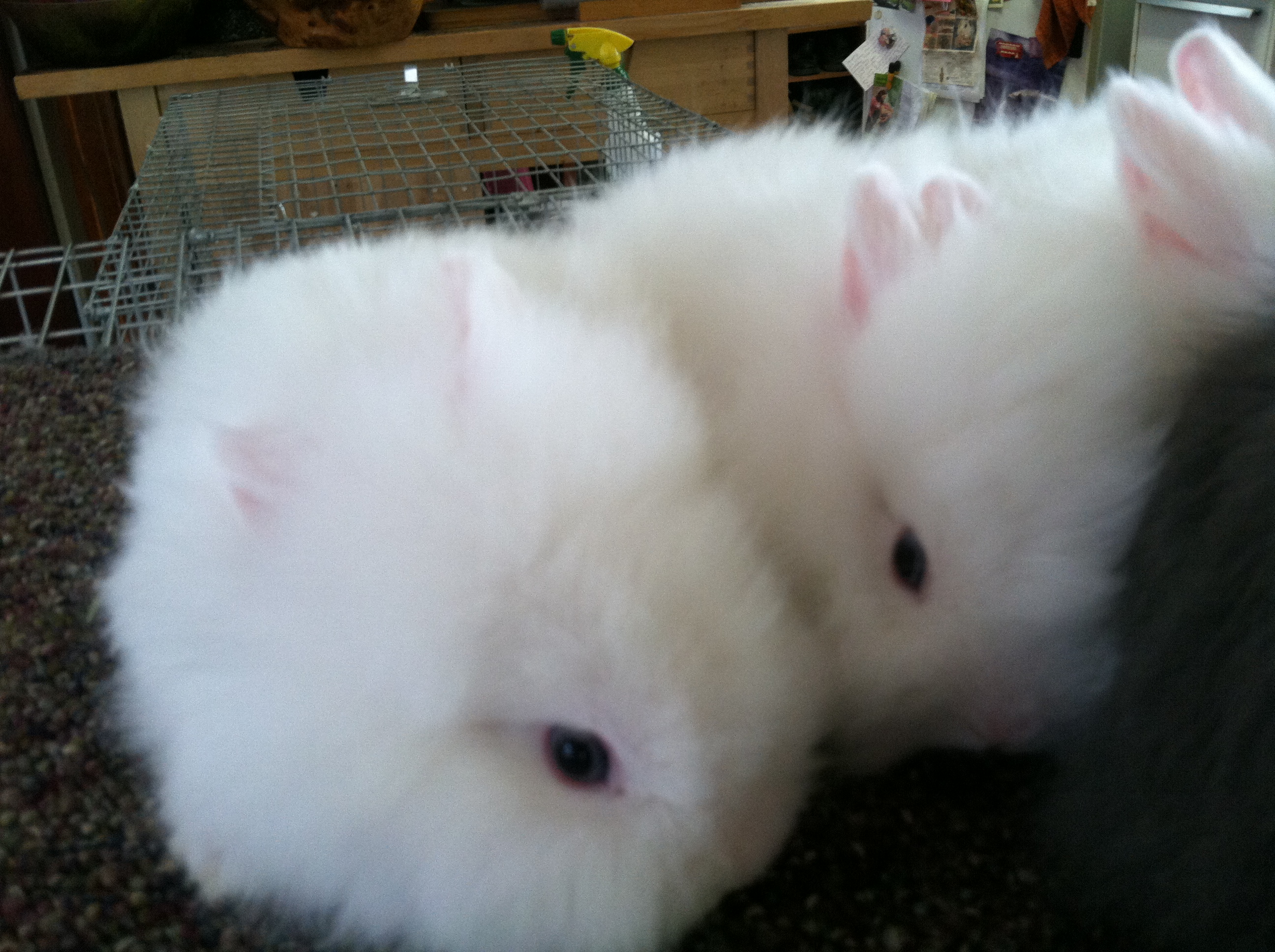 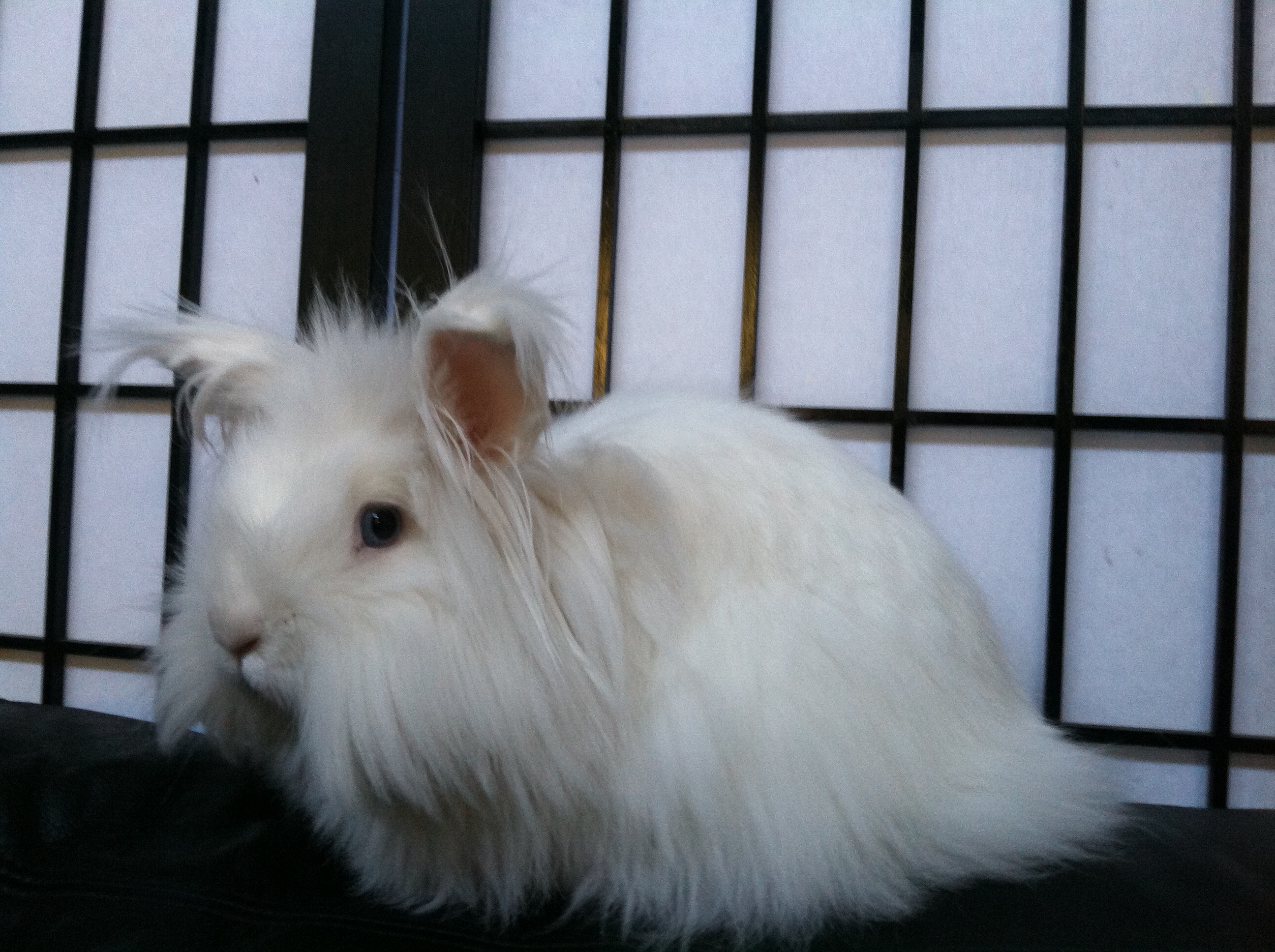 Cute as buttons, that fluff needs constant grooming! Not the most sociable animals or we would have kept them for fancy and housepets… take the cake with cuteness though for those who match their personality- there’s someone for everyone!