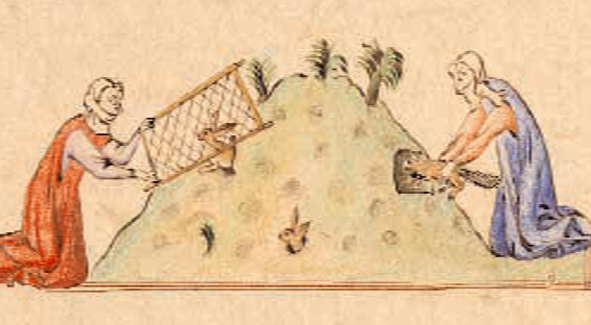 At Trickster Hares Farm we are part of a movement of people who are fed up with bad food – be it commercially produced vegetables, processed food, and factory raised meat. The nutrition is just missing from food grown in this way. It also doesn’t feel right, grown out of balance with nature. We would rather grow our own food and know its nutritious, to be living in mindfulness of what it means, life eating life, and to raise our animals in the kindest way possible.  It is not easy to raise your own animals to eat. And yet, buying meat from unknown origins is voting with our dollars into who knows what. We’ve all seen those videos of factory farms and slaughterhouses. I was a vegetarian for 16 years and voted in better farming practices, but I don’t think we’re there yet, not on the scale food is being produced in this country. I grew up with my Grandma’s farm fresh eggs, milk, and chickens. I know what real, fresh food tastes like, and how it feels in my body. As an energy worker, I don’t want the energy of suffering and trauma from factory farms in my body. There is another way to do it, and I like to think we do it right, but are always improving, growing, and learning more. We want our animals to have a good life, and as quick and untraumatic a death as possible. 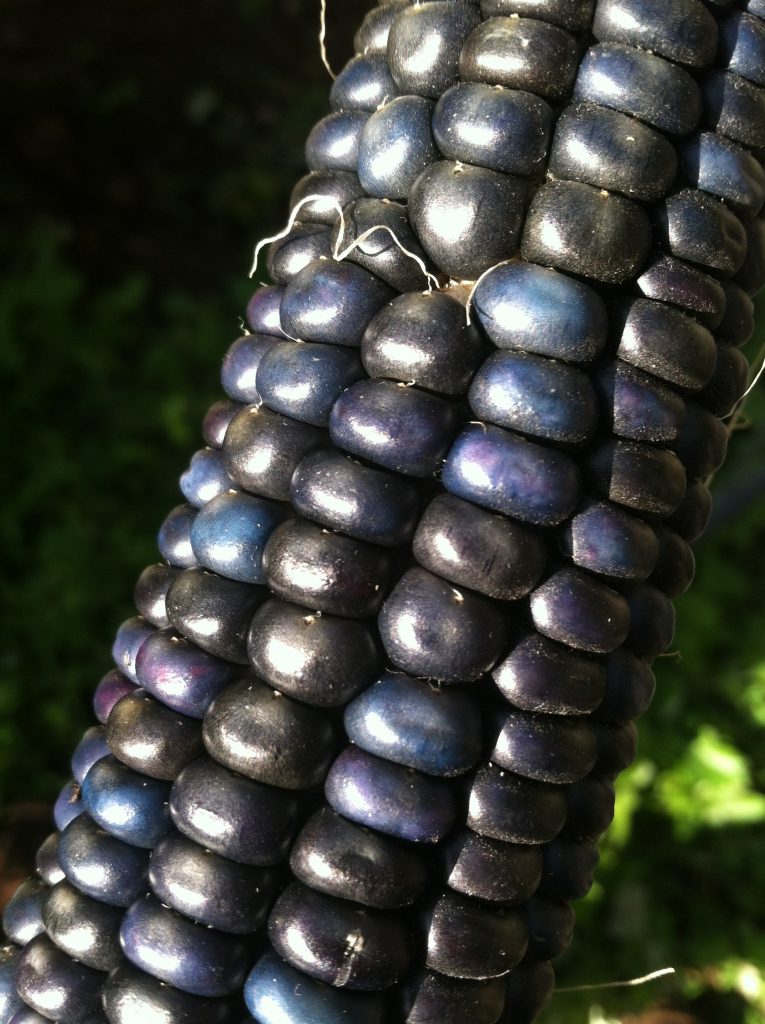 Harvesting is never easy for sensitive people, but we do our best to honor the souls of our rabbits. We conduct a ceremony, including their favorite instrument, the didjeridu (they like the low vibrations, they are ground animals) to help them prepare for their transition. This does seem to calm most of them to a more surrendered state of peacefulness. In this time, they are thanked, we ask forgiveness from them. Our intention is to honor the beautiful souls of these creatures we love, and honor the deep cycle of nature that we are part of, eating animals and plants to stay alive. We do not ever harvest carelessly, only on a day we have our full time and attention. Each living creature deserves this.

We also grew a very special sacred blue corn, used in ceremony for generations. Through dream life this connection was made to offer the blue corn to the rabbit spirits, as an offering. The amount of special tending this corn needed to thrive and be spirit food is one way we try to give back for what we take.

Given our recent move and the drought of our new-old homelands (my partner is a Coloradan), we can’t grow all our own food. What we can do is eat food that is grown somewhat locally. When we eat what is in season, we attune to rhythms of nature within our own bodies, and when it’s local we begin to energetically match to the soil here in our home, creating a sense of home and belonging. Eating food from out of the area does not feel as congruent to my system, so I avoid it. In a way, we are eating our home soil, rooting. I do not need to align with the minerals and soils in Chile. I need to be aligned with right here, Western Colorado. I am part of this land, this land is part of me, as are all creatures living on this land. 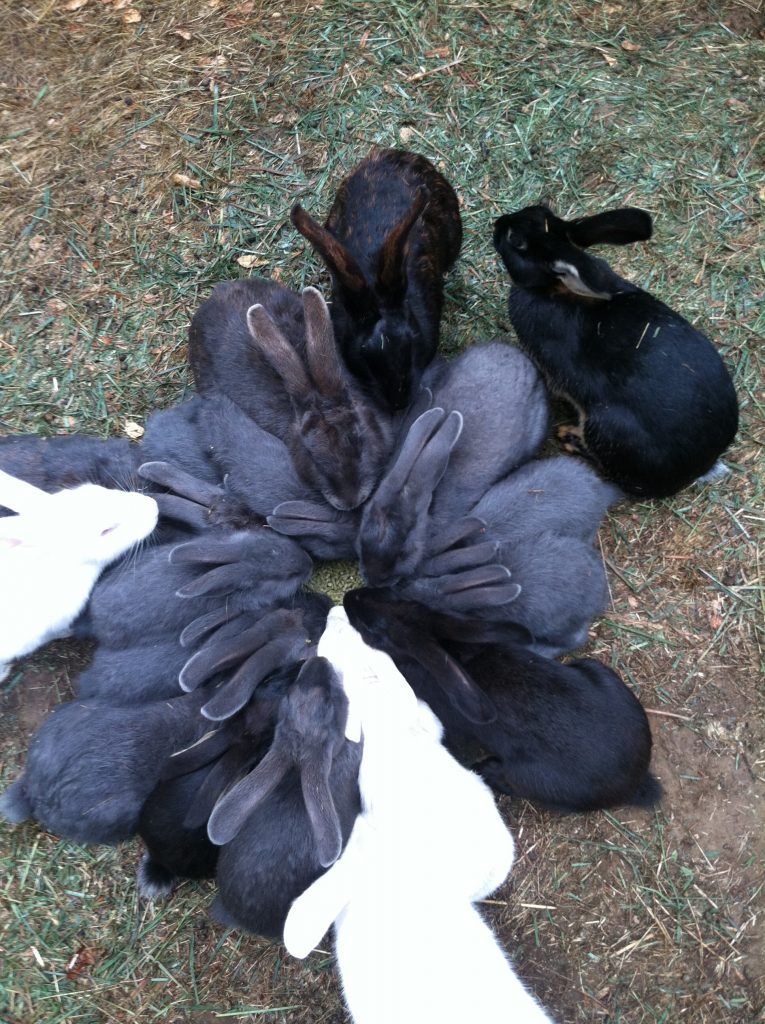 One thing that sets us apart is the way we tune into the happiness of our rabbits. We notice how many (but not all!) of them enjoy living socially. We try to keep sociable rabbits together to live in a more natural family pack. Some that don’t like to share space, do like to have their family nearby, and that is why we sometimes have sons and daughters on either side of mom. We have found this has helped with moodiness and isolation that some rabbits feel when separated from their blood family. All the rabbits together do identify with belonging to a herd. Ask any rabbit who escapes the exercise pen why they hang around and eventually make their way back into their cages!

In the past, prior to losing our farm in Occidental, CA, we experimented with natural rearing techniques.  We cultivated a pasture colony much like a herd of livestock, similar to how the European rabbit lived originally in the wild. That was great fun! We kept expanding, until we had four different fenced pastures so we could migrate the herds and let the fodder grow. Through trial and error we developed a system of keeping the does and their offspring in the colony – sometimes up to 20 rabbits – with the herd buck kept in a cage inside the colony pen. This allows us better timing and control with the litters and let him have plenty of socialization with his girls and offspring.

The secret to colony rearing is to introduce does when young. If they are babies, no one is offended by their presence, and they don’t challenge the pecking order.  It is much harder to introduce adults, especially if the rabbit has never co-habitated.  The system we’d developed that seems to work is to co-house the breeding does, remove them a week before they give birth. They get a private nursery cage for two months which is set right against the colony pen so they never lose touch with their friends, and reduces any squabbles later. The babies are weaned by putting the doe back into the colony.  As the babies grow, they either join the colony when they are big enough not to slip through the fencing, or put into show cage housing off the ground, or into a grow out pen which is rotated on the grass pasture so they don’t have to compete for feed with the adults.

Rabbits do have a hierarchy and who gets to breed are the ones at the top. If an underling gets pregnant she might get picked on, and so if I see that happen she is put into a birthing cage early and set inside or next to the colony pen so she is still part of the herd.  It takes watching and maintaining a herd in this way. Why do it? Its rewarding! I love being surrounded by a pack of curious rabbits pressing their noses into my legs, flopping out in the shade together, grooming each other. They clearly enjoy each other’s company. The only time there is disruption in the pack is when a rabbit is re-introduced or the top rabbit is removed for birthing, and a new pecking order has to be established. I’ve seen a lot of boxing but seldom is there serious injury.

We keep our show animals separated and off the ground for optimum condition and health, excepting play days in the runs. When they retire from the show table and breeding, they go back to the colony. Some show rabbits are co-habitated if they get along well with a sister, in which case they enjoy one large cage together usually five feet by 30″ which is plenty for these critters who get a bit lazy as they get older.

The show rabbits or non-sociable rabbits are kept in hanging cages. For the Belgian hares we had 6-foot wooden hutches to give them ample space to move, but had to give the hutches away with the closing of the farm. We now use portable cages, 5 ft long, 30″ deep and 24″ high, and cover the floors with rubber shock mats -the solid kind- and plywood. They seem to love the rubber it’s soft on their feet. They need the solid flooring as they are a very old breed that predates rabbit cages. In the late 1800’s rabbits were raised in wood hutches. They tend to rest on the tips of their toes and need the structure below them.

For co-housed does, I will often drop down a hanging wall and divide a doe giving birth from her sister or mother, this keeps other rabbits with interfering with her nest or jumping in there. After a few weeks, when the babies are big enough to be hopping around and I feel no longer in danger, I lift the wall again to let the two adults co-mingle if they are particularly attached, otherwise I wait until its weaning time. There might be a scuffle while they re-establish their dominance and then its over.

And for some does, they have no interest in sharing space with another adult no matter what. The rabbits will let you know!! If you see them squabbling, it may be time for a separation. More often than not these days I keep my show Beveren separated, and let them enjoy social time with three months with their babies, letting them wean on their own.

That’s just how we do it here, if you pay attention and listen to your rabbits they will tell you what they like!