I get questions about colony raising all the time, frequently from people who are also interested in Beveren. Since I raise 6 different breeds of rabbits its been interesting to note which ones do well co-housed in rabbit herds.

Surprisingly, its the American. They are hands-down the most laid back and willing to get along with each other with very little scuffling. Its not to be said I haven’t had some roughed up does from a dominance struggle, I do, but they’re more willing to go along with the social order once established.

Beveren are not what I’d recommend for a beginner. Mixing a few Beveren in there like I do might work but I notice when they ovulate they get cranky and can pick on the other rabbits. Not all the Beveren, just some. Beveren can be cage territorial sometimes too – an indication they have less tolerance for lots of competition.

My Americans on the other hand seem to thrive in the social setting. Do not put your show animals into a colony and don’t ever introduce adults. In the colony there are sometimes scuffles – particularly if you take the lead doe or second in command out for breeding – the other does will quickly box each other to see who will take her place! A torn ear and mouthfuls of ripped fur do happen.

The Harlequin do ok out there too but they sure are feisty. When the pecking order is established things seem to simmer down to peaceful. A boxing Harlequin is a sight to behold – enormous leaps in the air – they are the acrobats out of all my breeds. With their splashy colors, they’re natural performers. If Harlequins were people they’d be the gymnasts, Olympic track runners, and Cirque du Soleil performers. I kid you not.

My mixed blood Belgians actually do excellent in the colony. I have not put my full blooded Belgian Hares into a colony setting. I will as my numbers recover from our crash last year. They’re pretty social and non-aggressive. My Belgian buck Jack had a particular fondness for the colony, and did really well in there. Unfortunately I didn’t PUT him in there!! He was a naughty boy.

I stopped putting Hotots into the colony pen as they kept disappearing. I do not know why. They simply may not have run from overhead predators, I am really not sure. Rabbits have to be smart to thrive in the colony. We do not put bird netting over the entire rabbit pasture, just the core home area where the babies sometimes pop out of the ground.

We have a new breed in our mix, the Silver Fox, so in the year to come will see how that breed does in the colony setting too. So far, they seem like a very laid back personality.

We love the colony herd experience. Our girls seem to love it too. I wish we could raise them all this way. Note: do not put your rabbits in together like this unless they’ve been socially conditioned for warren living!!

I love it when spring brings all the grass back to the pastures and the pasture rabbits get released! They have been cooped together all winter and today is first mow. The Americans are the lucky pasture rabbits.

In each picture, can you spot the rabbit? 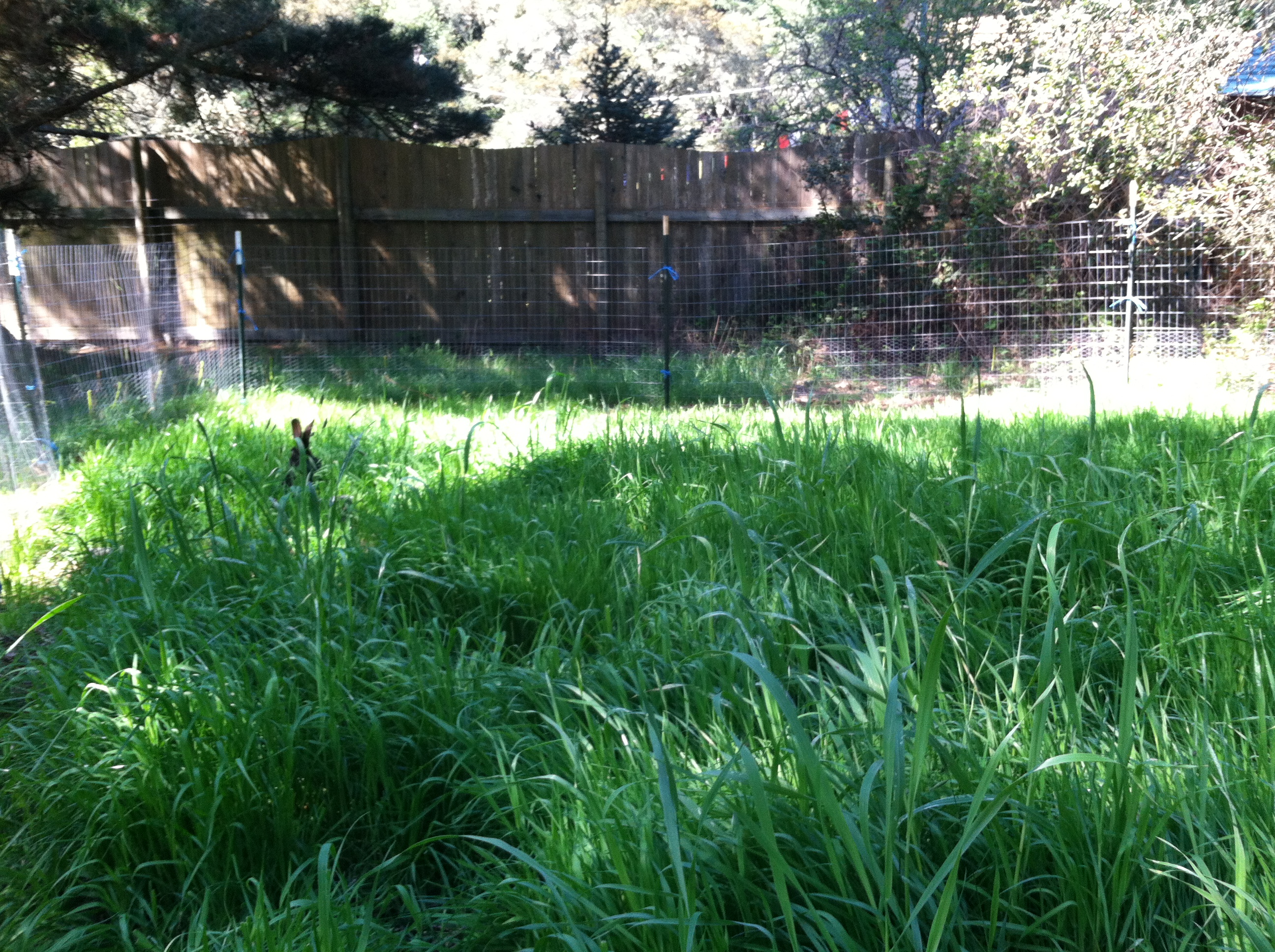 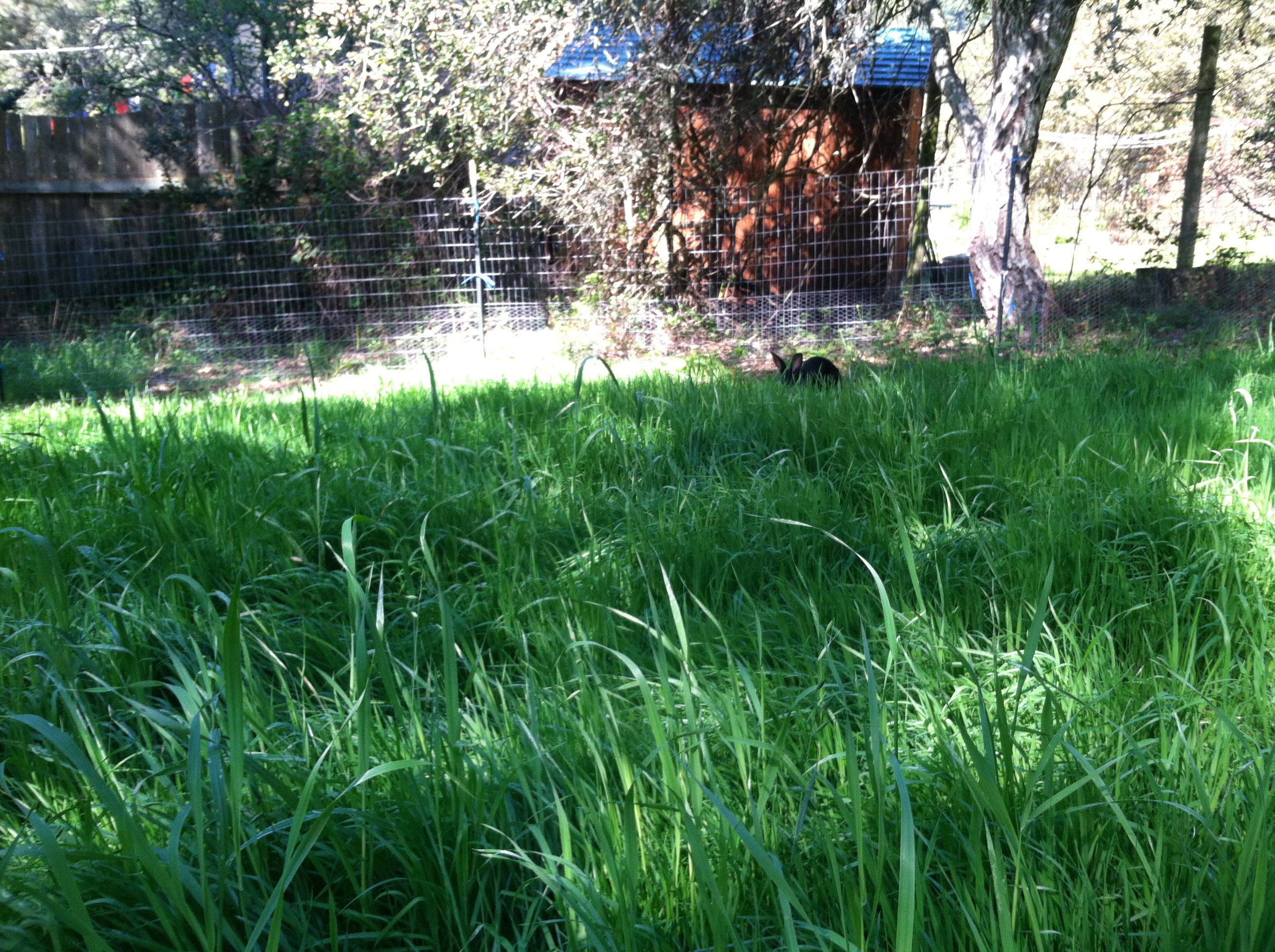 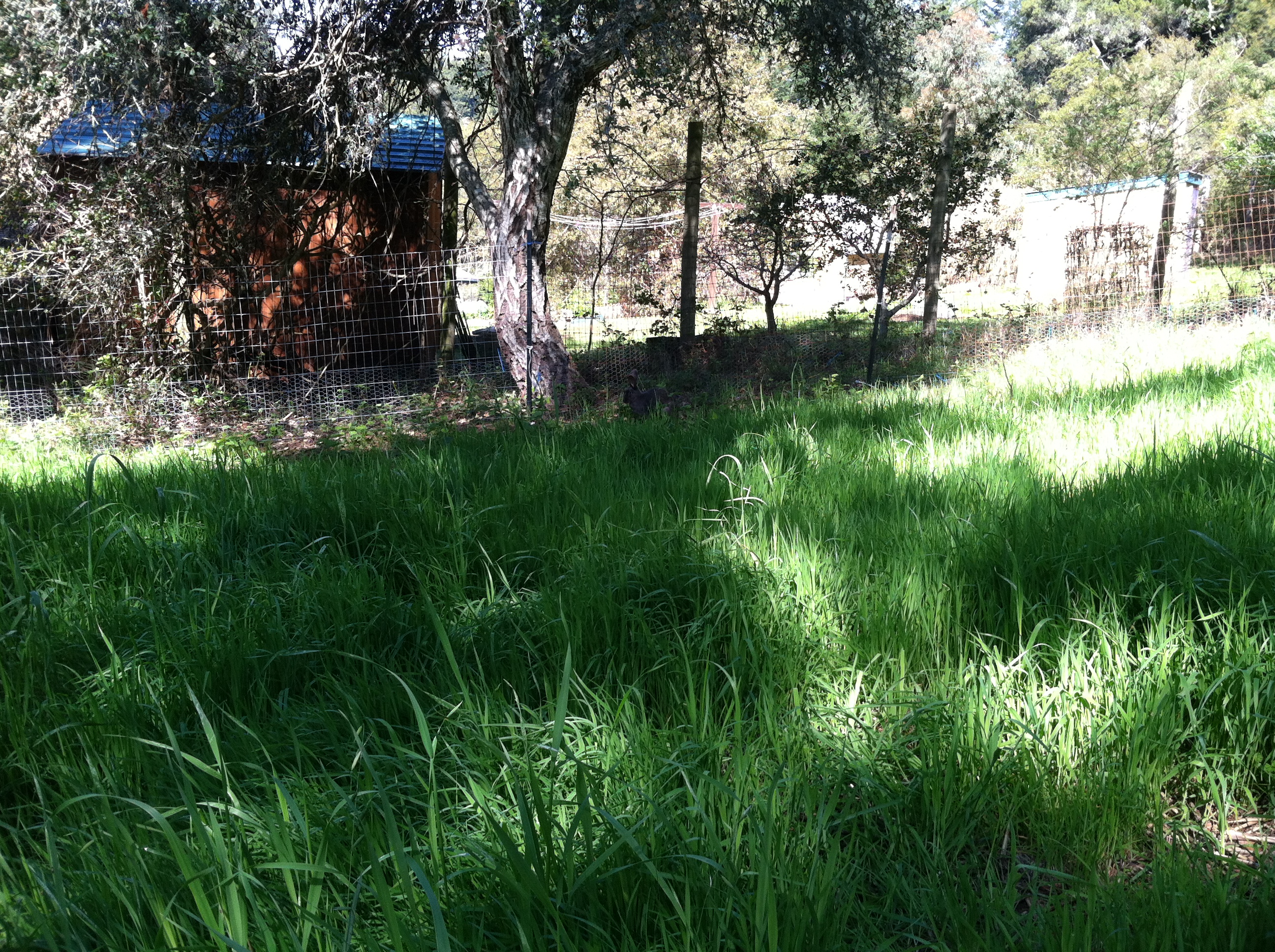 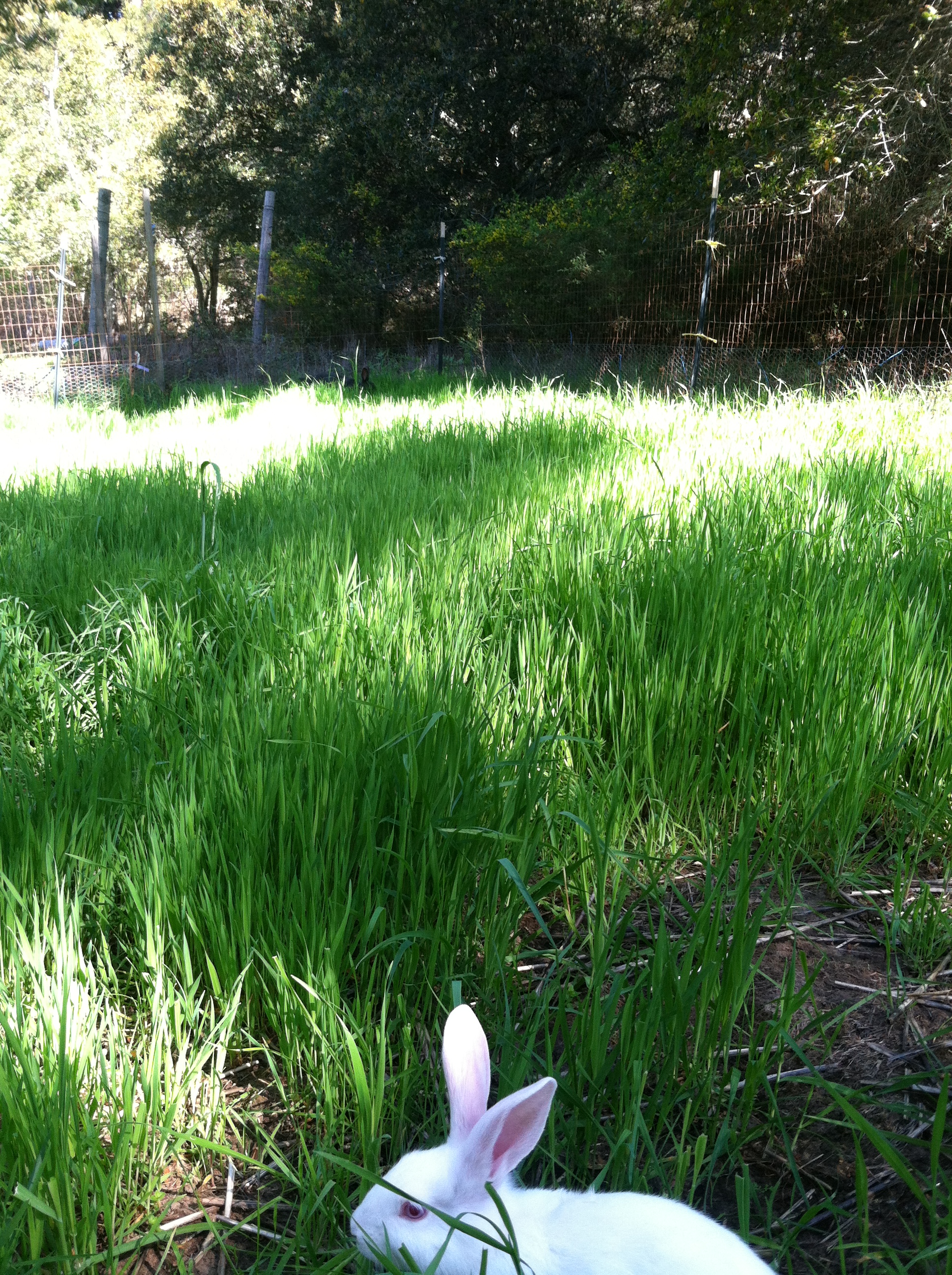 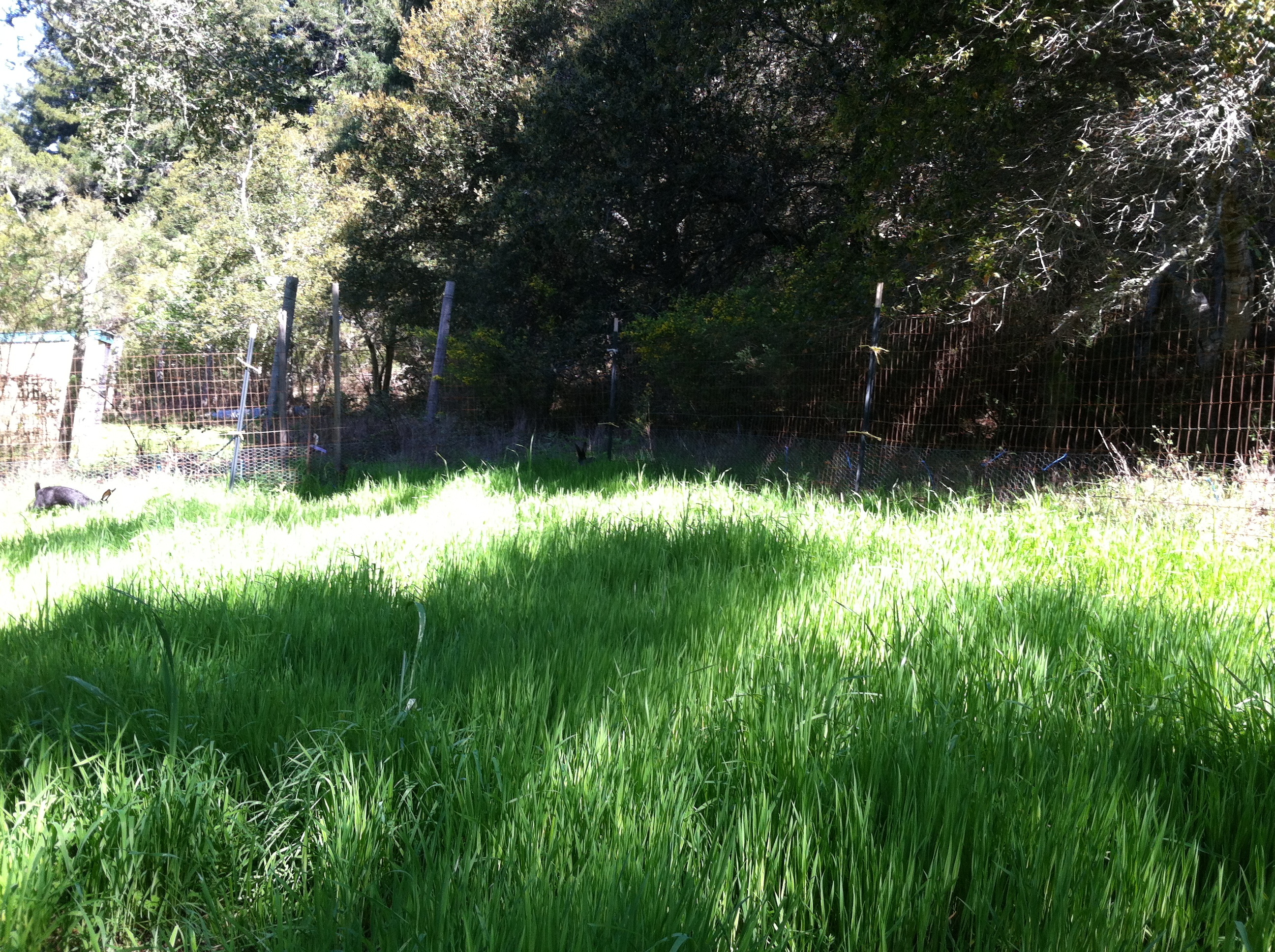